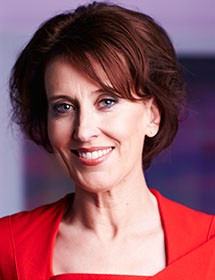 Virginia Trioli is the co-host of ABC News Breakfast, and has been presenting the program since its launch in November, 2008.

A two-time Walkley Award winner, Virginia has an established reputation as a radio host, television presenter, news reporter, features writer and columnist, Virginia joined ABC Local Radio in 2001 from The Bulletin, and for eight years hosted the Drive Program on 774 ABC Melbourne, and the Morning Program on 702 ABC Sydney. Virginia also presented Lateline on Friday nights in Sydney, and was a regular TV contributor on Insiders and Sunday Arts on ABC TV. Prior to broadcasting Virginia spent nine years as a news reporter, features writer, assistant news editor and columnist in Melbourne. Virginia is the author of ‘Generation F: Sex, Power and the Young Feminist’ published in 1996.