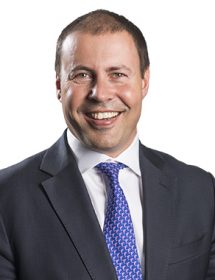 Josh Frydenberg was elected to the Australian Parliament in 2010 as the Member for Kooyong. He is the seventh person since Federation to hold this seat.

In August 2018, he was appointed Treasurer of Australia and Deputy Leader of the Liberal Party, having previously served as Minister for the Environment and Energy, Minister for Resources, Energy and Northern Australia, Assistant Treasurer and Parliamentary Secretary to the Prime Minister since the 2013 election.

As a primary school student Josh attended Bialik College in Hawthorn and then completed his secondary schooling at Mt Scopus College in Burwood.

Josh has Law and Economics degrees both with Honours from Monash University and completed his articles of clerkship at Mallesons Stephen Jacques.

He went on to graduate with a Masters in International Relations from Oxford University which he attended on a Commonwealth Scholarship and a Masters in Public Administration from Harvard University’s Kennedy School of Government.

Josh was a Senior Adviser to Foreign Minister Alexander Downer and Prime Minister John Howard and was a Director of Global Banking at Deutsche Bank AG.

Josh is a keen tennis player having represented Australia at the World University Games in England in 1991 and the United States in 1993.

He currently sits on the Board of the Kids Tennis Foundation which provides coaching to disadvantaged kids.