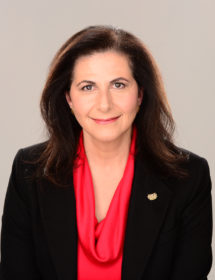 Senator the Hon Concetta Fierravanti-Wells is the Minister for International Development and the Pacific in Australia’s Federal Coalition Government.  She has served as a Senator for New South Wales since 2005.

Senator Fierravanti-Wells was sworn in as Minister for International Development and the Pacific in February 2016.

Prior to this, she was the Assistant Minister for Multicultural Affairs, with responsibilities in the Attorney-General, Immigration and Border Protection, and Social Services portfolios.  She also served as the Parliamentary Secretary to the Minister for Social Services, with special responsibility for multicultural affairs and settlement services.

Before entering politics, Minister Fierravanti-Wells worked as a lawyer with the Australian Government Solicitor, as a policy advisor to the Federal Opposition in the early 1990s, and Senior Private Secretary to former New South Wales Premier John Fahey.

For 25 years before entering the Senate, the Minister was involved in many different community organisations and activities including as a founding board director of a nursing home in Wollongong at age 23 years to the Board of Father Chris Riley’s Youth off the Streets for four years, with two years as Chairman.

Minister Fierravanti-Wells was the Ministerial Adviser to the Global Diversity Conference in 1995, and served as a member of the Multicultural Advisory Committee for SOCOG, Australia’s coordinating body for the 2000 Sydney Olympics.

Minister Fierravanti-Wells graduated with a Bachelor of Arts in Political Science and European Languages, and a Bachelor of Laws.

She was born in Wollongong, New South Wales and is the daughter of Italian migrants.  She is married to Commander John Wells (RAN Ret’d).