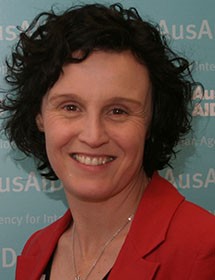 Rebecca Bryant is Assistant Secretary of the Economic Engagement Branch in DFAT. From 2010-12, Rebecca was AusAID’s Head of Office in Beijing, with responsibility for Australia’s aid programs in China, Mongolia and the Democratic People’s Republic of Korea. From 2008-10, she was Director Food Security and Rural Development, and from 2007-08 she was AusAID’s Counsellor in Honiara, Solomon Islands. Rebecca was previously an adviser to the Victorian Premier, the Federal Opposition Leader and the Shadow Minister for Communications. She has worked as a television journalist and a lawyer. Rebecca has bachelors degrees in law and international relations and a masters degree in anthropology.