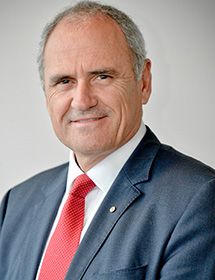 Dr Henry held senior policy advising positions in the Australian Treasury from late 1984 until early 2011. From 2001 to 2011 he was Secretary to the Treasury and a member of the Board of the Reserve Bank of Australia and the Board of Taxation. In 1997 and 1998 he chaired the Howard Government’s tax review task force that produced the policy blueprint, A New Tax System. He was a member of the Howard Government’s Task Group on Emissions Trading in 2007. In 2009‐10 he chaired the Review into Australia’s Future Tax System commissioned by the Rudd Government. As Special Adviser to Prime Minister Gillard in 2011 and 2012, Dr Henry was responsible for leading the development of the White Paper on Australia in the Asian Century.

Dr Henry is Chair of National Australia Bank and the Sir Roland Wilson Foundation at the ANU. He is also a Non‐Executive Director of the Australian Securities Exchange (ASX) and Cape York Partnership. He is a Governor of CEDA and a Council member of Voiceless.