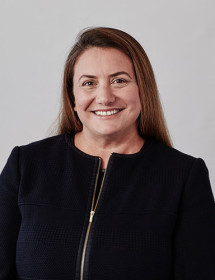 Julie Batch was appointed Chief Customer Officer at IAG in December 2015. In this role, she heads up Customer Labs, which is responsible for improving customer experiences and product, pricing, marketing and digital innovation through data and insights, customer engagement systems, brand architecture across the group, human centred design and new business incubation and venturing.

Julie was previously Chief Analytics Officer. She was appointed to that role in June 2014, responsible for Group Reinsurance and Analytics. Prior to this, Julie was the Chief Risk Officer in IAG’s Direct Insurance business (now Australian Consumer Division), where she led a group-wide program aimed at improving our information and analytics capabilities.

Since joining IAG in 2005 Julie has held a number of senior roles in Group Reinsurance including Group General Manager Reinsurance from 2008 onwards.

Earlier in her career, Julie held senior roles at Gen Re Australia, part of the Berkshire Hathaway Group, as well as other reinsurance organisations. She has extensive international experience including time spent in France, Monaco, London and Japan.

Julie holds a Masters of Applied Finance and is a Fellow of ANZIIF.