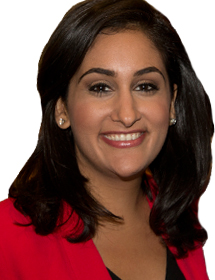 Del Irani is an award-winning journalist and TV presenter, who’s hosted shows on Australian and international television. She is currently a business presenter on ABC News and a host of ABC TV’s new show Escape from the City.  She’s also one of the creators and presenter of award-winning talk show, #TalkAboutIt.

Del started her career in journalism as a field producer, working on programs for Fox News, CBS and Channel News Asia, which involved travelling and living in many different countries including Bermuda, Panama, Belgium and Dubai.

Del spent four years in India working for various news organisations including Thomson Reuters, Times Now and BBC World News. She was appointed Mumbai Correspondent for BBC World News in 2009 and also became the Presenter of India Business Report, a weekly show broadcast to 77 million people. During her time at the BBC, she provided live coverage of breaking stories, including the trial of the lone surviving gunman in the 2008 Mumbai Terror attacks.

In 2013, Del was the only journalist from Australia to win a Jefferson Fellowship and visited the East West Centre in Hawaii as well as Tokyo, Beijing and Yangon, along with 14 other journalists from Asia-pacific.