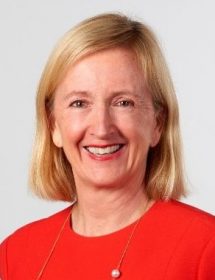 Cathryn was appointed to the role of Executive General Manager, Client Coverage in June 2017. In this role Cathryn has global responsibility for leading NAB’s relationship and servicing team of 350+, focused on institutional and corporate client relationships across key industry sectors.

Prior to this she held the role of Executive General Manager, Corporate and Specialised Banking. In that capacity Cathryn led a team of more than 1500 people providing banking services to a range of clients in the large Corporate, Corporate Property, Agricultural, Education, Health and Private Bank segments across Australia.

Before joining NAB in January 2016, Cathryn was Senior Managing Director, Institutional, Australia at ANZ Bank. During this period, she was responsible for development and delivery of ANZ’s most senior Institutional client relationships as well as delivering ANZ’s products and services to the largest corporate clients and financial institutions in Australia.

Cathryn joined ANZ as Managing Director of Corporate Finance in 2005 before moving into Capital Markets in 2008, as the Global Head of Capital Markets. In October 2010 she re-located to Hong Kong where she led the team responsible for providing debt capital markets solutions to ANZ’s Institutional and Financial Institution borrower base in 14 countries. Cathryn’s team included more than 170 experienced Capital Markets specialists, located around the globe.

Cathryn is Deputy Chair of The Australia-Sino One Hundred Year Agricultural and Food Safety Partnership (ASA100) and a member of Chief Executive Women, an organisation representing over 300 of Australia’s most senior women leaders.