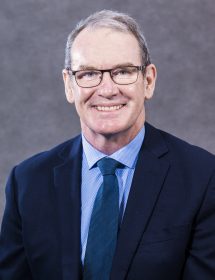 Brendan is the Chief Executive Officer of the Queensland Reconstruction Authority (QRA).

Formed in 2011 following the devastation of the Brisbane floods, QRA coordinates recovery, reconstruction and resilience efforts across the state following a disaster.

He is a regular contributor to national and international dialogue on disaster risk and resilience and has addressed the United Nations Office of Disaster Risk Reduction’s Asian Ministerial Conferences on multiple occasions. He is a passionate advocate for cooperation and collaboration across international, national, state and local agencies for disaster preparedness, response and recovery.

Brendan is also the State Recovery Policy and Planning Coordinator, and has previously held the role of General Manager, Environment, Biodiversity and Sustainability of Wyaralong Dam Alliance.

He is a graduate of the University of Queensland.