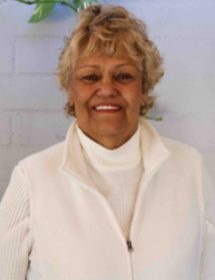 Millie was born and raised on an Aboriginal reserve called Erambie, in Wiradjuri country (Cowra) in central NSW. She has worked in Aboriginal affairs all of her life at a community level and in government.

Millie was CEO of Wyanga for 10 years and was instrumental in negotiating with the federal government to obtain Wyanga’s permanent home at 35 Cope Street Redfern.

Millie retired in 2013 following her whole adult working life working in Aboriginal Affairs.  She worked in manufacturing industries in Redfern from the early 1960’s before coming into the Aboriginal Affairs area when the late Charles Perkins first came to Sydney.

Millie is still very much involved since her retirement. Is treasurer of Wyanga, a Board member of the Inner City Empowered Communities, is on the Advisory Committee for Corrective Services, was a member, and now champion of the Justice Reinvestment NSW program. Joined with FACS for 3 years on the Keeping them Home project. She attends many of the information programs and workshops in the inner city area on many issues, not all of which are in Aboriginal Affairs.