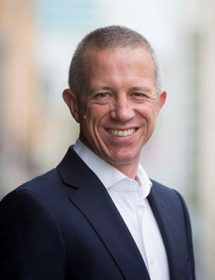 Anthony Healy was appointed Chief Customer Officer, Business & Private Banking at National Australia Bank (NAB) in December 2017, following three and a half years as CEO and MD of Bank of New Zealand (BNZ).

As a career banker, Anthony brings considerable experience across banking and financial services, having held CEO roles and senior executive and director-level roles in a 26 year career spanning Australia, New Zealand, Asia and the Middle East.

Anthony joined NAB Group in 2009 as a member of BNZ’s Executive Team and led BNZ Partners – the company’s business banking division – for four and a half years. Following that role, Anthony was appointed CEO and MD of BNZ in May 2014, where he also served as a member of the BNZ Board, as chair of the NZ Bankers’ Association, a director of JB Were (NZ) Holdings Ltd and The Icehouse Ltd, and as a board member of the NZ Banking Ombudsman scheme.

Prior to joining BNZ, Anthony spent 18 years with the ANZ Banking Group, most recently as CEO of UDC Finance and prior to that as Deputy Group Managing Director of AmBank Group, Malaysia’s fourth-largest banking group. He also held executive and leadership positions within ANZ’s Corporate and Business Banking divisions in Australia and New Zealand.

Anthony is committed to NAB’s vision to be Australia and New Zealand’s most respected bank, and is inspired by NAB’s purpose – to back the bold who move Australia forward. In his role as Chief Customer Officer, Anthony sees his key responsibilities being: to focus organisational attention on the customer; support front-line bankers; drive innovation and growth in the B&PB division; and to work with his Executive colleagues to transform the NAB and deliver sustainable returns for our shareholders.